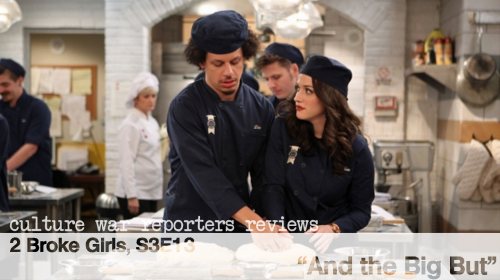 Welcome back to the CWR 2 Broke Girls Reviews, everyone! Did you miss the show? Did you miss me [writing about the show]? I’m going to say upfront that I appreciated the break like nothing else, and coming back was . . . difficult. Approaching a show from that angle is far from helpful, and I ended up analyzing every little thing, as I am wont to do regardless. But then the tone of the episode, and perhaps the rest of this season, became crystal clear.

2 Broke Girls is channeling the rom-com vibe like a successful séance.

Fans of the show are well-aware that things are tense between Caroline and Chef Nicolas, what with him having an épouse back in France and all. On the snarkier, darker haired side of the coin, however, Max has not gotten a lot of action in the drama or bedroom departments. A little bit back with Johnny in Season 1, but since then it has been smooth sailing because her boat has not been rocking. The writers’ room has finally decided to amend that issue, but in a way that makes it feel like a Katherine Heigl movie.

Don’t Trust the B—- refugee Eric Andre has been more or less just playing a goofy dude as Deke, more friendly than flirty. This week he and Max bro a good amount, but also get their dough wet together [not a euphemism] as shown in the image up top. Not one to buck rom-com convention she must of course struggle with whether a potential relationship is worth ruining what they have going on right now. She’s not entirely against the idea, though [“I’m not bromophobic!”].

We’re sticking with the formula, so it stands to reason that Deke has another prospect on the side, and that in her indecision Max tells him to go to her. Go to the titular Judy with the Booty [played by the, uh, endowed Estrella Nouri]. Well, Max doesn’t know her nearly that well, she meant “Judith with the Bootith”. She’s sad, as is typical of someone in her position.

Then finally, in the third act, he admits that him and Judy with the Booty never got to bumping uglies, and he kisses Max. In response to a line that really does feel cribbed from a movie called Misunderstandings Create Conflict Between Potential Lovers But Are Ultimately Resolved.

Then they kiss and it’s beautiful, I guess:

And so that’s what happened to Max, and I feel the need to reiterate it if only because the tone is just so darn strong. The other threads [I’ll get to Caroline’s in a sec] don’t exude it that strongly, but overall it really feels like a twenty-something minute rom-com. Not that there’s anything wrong with that, of course, but it’s not what 2 Broke Girls has been, even when the aforementioned Johnny was around. Kat Dennings is no Katherine Heigl, is what I’m saying. It remains to be seen how this season wraps up, but with so much emphasis placed on relationships that both female leads have with their respective love interests [I really am excited to get to Caroline] I’d be surprised if this didn’t keep up for at least a few more episodes.

As for Caroline she tries to be angry at Chef Nicolas about his cheating, and later breaks into his office with Max to steal exam info so that the latter can pass. This leads to a few lines that Beth Behrs delivers like, well . . . like it’s her job and she’s very, very good at it. I said it before and I said it again, her comedy game is on point in a big way:

“I’ve missed you. I’m in your office. That’s the only logical explanation I have for being in here”

“Now, kiss me again! But this time lay on top of me so your legs are out of the way. Now go!”

And lastly, before I get to the Stray Observations, I want to take this time to specially highlight that Earl refers to Han’s entrance from the winter-cursed outdoors by quipping “Still don’t know where Han is, but the new Bond villain just arrived.” I need to tell you all that Zao, from Die Another Day is one of my all-time favourite henchmen ever, Korean or otherwise. I mean, dude straight-up has diamonds in his face.

The Title Refers To: Judy with the Booty. I want to talk about how there is a big “but” regarding Deke and Max’s relationship, but that particular aspect of it is never really stressed at all. Sorry.

The Hopefully One-Time Section in Which I Tell Professional Comedy Writers How I Would Better Do Their Jobs: