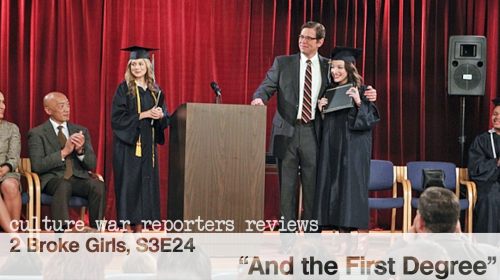 The season finale to any show is, to put it bluntly, important. It’s the culmination of several episodes, hours of television, and must assure viewers that their time was ultimately well-spent. Narrative arcs being drawn to a close is a given, and many series are burdened with the added responsibility of this installment potentially being their very last. It needs to work as a cap to the season, but also possibly for the show as a whole.

Seeing as 2 Broke Girls was renewed for a 4th season two months ago, the latter issue was not one the writers had to grapple with. The problem is that even when concentrating on the bare minimum of what’s expected this finale barely passes. Kind of like Max Black and high school. Flawless Segue Achieved.

Look, I’ve laid it out pretty clearly in the review from two weeks ago, but past season finales have not had this problem-

-this season ends with Max finally passing a US History final and getting her GED [high school diploma]. It’s not so much that it barely meaning anything to her, it’s that it means next to nothing for Caroline as well. As an episode of 2BG there’s nothing wrong with it, and it’s actually funnier than most [as the hefty Stray Observations below would attest to]. The problem is that this needed to be more than that.

There’s certainly content there that has the possibility of going above and beyond the age-old message that Caroline supports Max and they have a generally healthy relationship. Ex-history teacher now-principal Mr. Huck doubts Max and sees that he was wrong about her. In that alone there’s an exploration of a father figure in her life that’s not Earl, or maybe even her realizing that she doesn’t need validation from others [not when she has such a great support group, more on that in two paragraphs].

What’s most upsetting is that they actually build towards something that could be extremely significant. It’s not that we find out a little more about Max via the revelation that she was raised in Rhode Island [and is not NYC born-and-bred, as I’d previously believed], but that the show teases an emotional moment and then reneges on that promise.

Mrs. Black has long been a figure in the girls’ lives, if only because she’s constantly being brought up as the reason Max had a nightmarishly awful childhood. There’s a mix of resentment and apathy towards that woman, and when Caroline forces her best friend to invite her to see Max graduate with the Northeast High Class of 2014 I got legitimately excited. This could be the kick in the pants the show needed to shake up the characters! This could give us something to look forward to this fall!

She never shows. Instead the gang from the diner enters through the gym doors as Max’s surrogate family, a barely-fleshed out [barring

Caroline] group of characters who do their very best to form any semblance of a loving, cohesive unit. While viewers may believe otherwise, the truth is that Han, Sophie, Oleg, and Earl only ever come together to support exactly one of the two title characters. Without her they’re nothing, and only pop in and out and as needed.

But that’s me criticizing the show as a whole instead of solely this episode. As I said earlier, it’s not a terrible twenty-some minutes of TV, and if I were grading these I might actually give it a B+ [scaled against the show as a whole of course]. Given how things end, I have no idea what to look forward to in this upcoming season, or if I should at all.

For those of you who tune in week after week, I am going to be sticking with this. On one side of things, there’s the fact that I do not ever give up on shows, even after my love for them wanes to close to nothing. On the other this is the first show I’ve reviewed, and tracking its progress is an experience I think I need. On yet another side these pull in the views like crazy.

I’ll see all of you loyal readers, if there are any, this fall. I’m going to keep watching and writing about 2 Broke Girls, and if you want to keep seeing what I have to say I’m more than happy to have you.

New Total: $2,572. I guess bus tickets are pretty expensive? Google tells me you can snag tickets from NYC to Rhode Island for as low as $25 each way. EDIT: Halane in the comments points out that they must have had to pay for staying over at the motel as well.

The Title Refers To: The first degree Max Black ever receives, seeing that she never received one from pastry school.