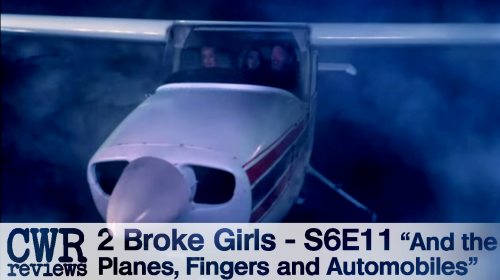 Despite Max’s sobering realization last week that things between her and Randy are officially donzo we open up, after what I believe is an unprecedented “Previously on 2 Broke Girls” segment, with her announcing that she’s off to LA to save their relationship. “And the Himmicane” marked a real low for the character, with half of the titular duo actively deluding herself that the breakup was in fact just a break. Watching “And the Planes, Fingers and Automobiles” I kept noting how much stronger Max appeared compared to the last time I saw her, but also observed that it was still in service to keeping things with Randy going.

Caroline spins the quest to save . . . Mandy? Rax? [I like the latter’s double entendre] into a vacation, since the Dessert Bar needs to be heavily renovated anyway after the hurricane damage. Since Max strong-arming Han into letting them use his recently acquired Toyota Yaris results in him chauffeuring the two the diner is left to, Earl and Oleg, “a real murderer’s row.”

A predictable series of mishaps has them go from Yaris to 18-wheeler to single engine plane, and while that’s all one brush with death after another what’s far more compelling is the reason they’re on this trip to begin with. Regardless of the vehicle Max is constantly stalking Randy on social media, and has a miniature crisis when she sees a finger on his shoulder in the last split second of a Snapchat story.

I mentioned just a little earlier that I thought Max was stronger this episode, and that’s certainly true. She creates a goal for herself and doesn’t let anything get in her way, including the extremely high chance of dying in a plane crash. The thing is that her obsession with Randy, and the fear that he’s already moved on, are so palpable. There have been a surprisingly high number of emotionally vulnerable moments for Max this season, and it’s made her a much more compelling character. Whereas other sitcoms have boiled their characters down to their base elements by now 2 Broke Girls actually appears to be imbuing one of its leads with more depth, a laudable feat in its sixth season.

As the plane starts to nosedive, with the girls ostensibly having to make their own way to Texas from wherever it lands, it feels like a metaphor for Rax [yeah, I’m sticking with it]. Max Black is really doubling down on this working out and there doesn’t appear to be any going back.

Speaking of going back, the diner manages to not burn itself down in their absence. It’s actually pretty entertaining having the rest of the cast interact with one another, especially when Sophie, who’s taken over as a waitress, actively tries to fill the hole they left behind. When Earl asks her why she’s calling him “girl” she replies matter-of-factly that she’s just “calling [him] a woman like the girls do with Han, except he takes it!”

Oh, also the finger belonged to Randy’s mom, so no big deal.

New Total: $3,521.62. When the plane starts to lose control pilot Sloppy Joe [currently uncredited on IMDb] tosses out Caroline’s suitcase which is holding “all my clothes, all our money, our credit cards!” She is also reported to have gotten extra money from the insurance people because she told them she and Max were pregnant. Either way, the loss of the two grand likely stems from the now-missing suitcase.

The Title Refers To: The 1987 John Hughes comedy Planes, Trains and Automobiles, which also neglects to use the Oxford comma. The choice to insert “Fingers” in lieu of “Trains” is due to the finger Max is consumed by for much of the episode. 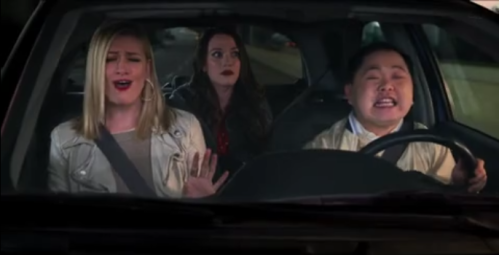 “What’s a road trip without a singalong?” / “I don’t know, tolerable?”

“Correlation doesn’t imply causation, but it does waggle its eyebrows suggestively and gesture furtively while mouthing ‘look over there’.”

It’s one that passed through my mind again while I was watching “And the Planes, Finger and Automobiles” due to a relationship I observed between Max’s lines and her own emotional distress. This feature, repeating weekly, is dedicated to those connections which may be directly related to one another but, then again, may not be.

State of the Correlation/Causation

It’s apparent throughout this episode, as well as the ones preceding it, that Max is undergoing a lot of emotional distress. You could even argue that it reaches a peak here due to her taking drastic action to revive a relationship for what I believe is the third time.

HelpGuide.org lists the symptoms of stress as being:

Given the sitcom format I want to posit that another way this can be seen in Max is a noticeable downturn in her wit and snark. To start with, upon seeing the offending digit in Randy’s Snapchat Story she declares “I gotta finger this out!” Later on in the plane she says the title of the film “Silver Linings Playbook” twice in reference to the positive in what’s an increasingly grim situation. A single mention is understandable, but twice feels out of character for her.

It could even be argued that, as the core of the show, the poor writing Max receives has an effect on the other characters in her orbit. When referring to his Yaris Han initially says-

“Um, this thing is smoking more than my grandma at the bingo finals”

-then, mere minutes later, he follows that up with-

“…’cause that car is deader than the conversation at the Jolie-Pitt Thanksgiving this year.”

Again, a single analogy to describe the state of his vehicle would be more than enough, but we receive two. The question I would like to introduce, but don’t necessarily have the answer to, is whether or not Max’s precarious emotional state, which ultimately makes the show more interesting, could result in a decline in comedic writing, making the show less funny. Please consider and discuss amongst yourselves.

2 responses to “2 Broke Girls, S6E11 “And the Planes, Fingers and Automobiles”: A TV Review”