Here are the facts:

At the time of this writing 2 Broke Girls has not yet been renewed for its 7th Season.

Here are the numbers:

This past Wednesday the finale for Season 6 of 2 Broke Girls aired with a viewership of roughly 4.57 million. This is 70 thousand less than the preceding week, and bookends the steady, gradual decline that began back in February. It’s the smallest audience the sitcom has had, not only in what has been a poor season ratings-wise, but since it first began airing.

In other words, 2 Broke Girls is not doing well.

There’s no other way of putting it. Being critically panned doesn’t matter at all if people are watching, but all indicators point to this not being the case. Now granted, the numbers presented are via The Nielsen Company, and don’t account for any viewers who may choose to stream the show online, but they provide a fairly compelling picture all things considering.

Here’s what the creators have said:

Now pretty much every site out there covering this has quoted this one TVLine article, but given that Michelle Nader is the co-showrunner it’s about as close to the horse’s mouth as you can get. She made the statement that:

“This is not the end for these girls. We’re not finished and we don’t want to be finished and I don’t think the audience is finished. Obviously there’s no guarantee that we will be back, but we did not write the episode as a series finale.”

END_OF_DOCUMENT_TOKEN_TO_BE_REPLACED

This is the fifth I’ve reviewed, so in addition to what’s expected of a typical season finale it’s also worth considering how 2 Broke Girls in particular tends to wrap things up. For the past few episodes what can only be assumed are the profits from Max and Caroline’s Dessert Bar have been climbing, but without any indication as to why that number is important. Now that the season is coming to a close tradition dictates that money come back into focus. END_OF_DOCUMENT_TOKEN_TO_BE_REPLACED

2 Broke Girls, S4E22 “And the Disappointing Unit”: A TV Review 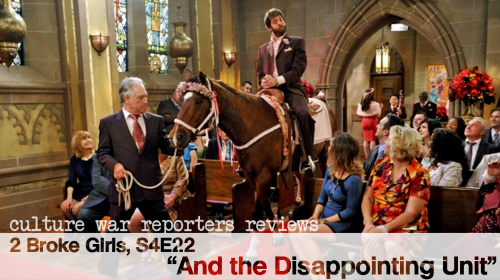 Here we are at last, presented with nearly twenty-two full minutes of television to cap off the fourth season of 2 Broke Girls and set the stage for the fifth. As I’ve pointed out in the past few weeks leading up to this one there is a lot riding on season finales, so it really pains me to say that this one does not deliver.

In my review of last season’s finale I listed off the momentous events that closed off the show’s first two years, which are as follows:

I also noted the way that that particular season ended:

Which, let’s all be fair, is and was not the biggest deal. I mean, yes, it’s great that Max now has a high school diploma, but what does it mean for her and Caroline moving forward? Absolutely nothing, that’s what. This season’s finale does at least include both girls, but can unfortunately be summed up as:

That’s right, it dawns on them that they once had a plan to start their own business, a plotline that can actually be traced back to the very first season. What’s really jarring about this epiphany is that they’ve been in possession of their very own cupcake shop with its new storefront from the beginning of Season 3 to the end of Season 4. To have that fact in mind and then hear Caroline say that they “haven’t abandoned it, [they] just haven’t paid attention to it in three months” only makes it that much weirder. END_OF_DOCUMENT_TOKEN_TO_BE_REPLACED

The season finale to any show is, to put it bluntly, important. It’s the culmination of several episodes, hours of television, and must assure viewers that their time was ultimately well-spent. Narrative arcs being drawn to a close is a given, and many series are burdened with the added responsibility of this installment potentially being their very last. It needs to work as a cap to the season, but also possibly for the show as a whole.

Seeing as 2 Broke Girls was renewed for a 4th season two months ago, the latter issue was not one the writers had to grapple with. The problem is that even when concentrating on the bare minimum of what’s expected this finale barely passes. Kind of like Max Black and high school. Flawless Segue Achieved. END_OF_DOCUMENT_TOKEN_TO_BE_REPLACED

I Shouldn’t Have To Say This, But Community Should Be Good [Or At Least Better]

It’s one of those weeks where Friday rolls around and I find that I’m writing my fifth post of the week. Granted, two of them were reviews and one of them I co-wrote, but it’s still a lot. One of my favourite things to do to shake up the ol’ grey matter is watch a little TV, so of course I ended up finding myself unable to blog about anything else but the finale to Season 5 of Community.

Strangely enough, this is the show that’s appeared most on this site [save for 2 Broke Girls, but y’know]. While I began with discussing Season 3’s wonky airing schedule, I very soon turned to providing constructive criticism. Then came two posts where Gordon and I discussed Seasons 4 and 5, respectively, in which I took to defending the show and the directions it was taking [in contrast with his outright vilifying it]. Having just come off of that last episode I’m not sure I can maintain that stance anymore. END_OF_DOCUMENT_TOKEN_TO_BE_REPLACED

5 Lessons from the HIMYM finale

So, How I Met Your Mother is finally over. And the internet is pissed.

This is what everyone wishes they could do to the writers.