This isn’t news for almost anyone who has been watched the late night sketch comedy mainstay at any point in the last four decades. Still, this fact was made all the more apparent when they announced the six new cast members that would be coming aboard last September. In case you didn’t know, they amounted to five men and one woman, all Caucasian.

Given the fairly sizable [and reasonable] amount of outcry over this, Lorne Michaels and the powers that be ushered in Black comedian Sasheer Zamata. Given the speedy response to their complaints the internet quieted, content with SNL and how it was dealing with race for the time being. That ended, of course, this past Saturday.

While Zamata’s casting was lauded by many, something else occurred concurrently which was less publicized, though arguably just as important: LeKendra Tookes and Leslie Jones, both Black women, joined the show’s writing staff. Ideally such a move would help the show to broaden its comedic range given life experiences that differ vastly from that of a White person, male or female, living in the USA. That particular perspective was showcased front and centre when Leslie Jones made her on-camera debut during the most recent episode’s Weekend Update- 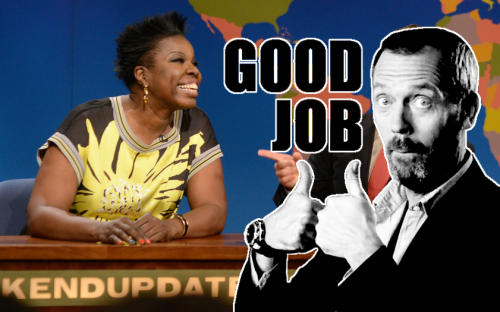 Watch the video here or here.

Now I’m well aware that this entire issue has been like a can of worms filled with smaller cans of worms. Jones has come under a huge amount of attack for her bit, with the vast majority of it coming from Black people. Over at xoJane Rebecca Carroll called the sketch “full on coonery” which . . . well, speaks for itself. Here’s just one of many tweets leveled against Jones by a Black woman:

Thx #lesliejones you confused a nation of ppl who got an OK from a black woman on making slave/forced mating jokes. #sarcasm #SNL

To put it bluntly, she’s being heralded as the Number One Enemy To Black Women Everywhere. What’s funny, though, and one of the things I want to praise her for, is that the topic she’s riffing on is such a constant, significant part of life for Black women everywhere: their physical appearance.

Colin Jost, who I really have nothing nice to say about, invites “in-house image expert” Leslie Jones to talk about Lupita Nyong’o being named by People magazine as the most beautiful woman of 2014. While she congratulates the actor on being awarded such a title, Jones immediately launches into how she’s looking for the “most useful list”. While Nyong’o is indeed quite the looker, Jones is more concerned with being valued for her size and strength.

Now that’s interesting. We live in a society that places so much emphasis on outward beauty and aesthetic attractiveness, and she knows it and puts it on the spot. The problem is, and I’m calling it that if only because certain people are viewing it as such, that she calls it out by contrasting it with an era during which slavery was the norm.

Regardless of whether you think it was funny [I did], I’m going to straight-up applaud her for not only lampooning our cultural standards, but also breaching a sensitive issue in America’s past through humour. Not only that, but she refuses to back down or apologize, a trait not admirable in every case but certainly in this one [the full list of her tweets can be seen here]:

And it saddens me that BLACK PEOPLE bitch and moan about the most stupid shit. I'm a comic it is my job to take things and make them funny

to make you think. Especially the painful things. Why are y'all so mad. This joke was written from the pain that one night I realized that

If anybody should be offended is white folks cause it's what they did. Y'all so busy trying to be self righteous you miss what the joke

or jay z or Kanye put in a rap they would be called brilliant. Cause they all do this type of material. Just cause it came from a strong

black woman who ain't afraid to be real y'all mad. So here is my announcement black folks, you won't stop me and Im gonna go even harder

She’s very, very aware of what her referring to that chapter of African American chapter of history does, and she stands by it because feeling uncomfortable and finding something humorous have long gone hand it hand. When it gets right down to it the question is why so many people have surpassed uncomfortable and fallen into offended.

W. Kamau Bell, who hosted the sadly now-cancelled Totally Biased with W. Kamau Bell, believes that it has something to do with the context of the show itself, and not the actual content. I’m going to end with his words, while reaffirming that I think Leslie Jones is doing the right thing, and that I hope she continues doing it:

“…I believe if Leslie Jones had done her bit on ‘Comic View’ or ‘Def Comedy Jam’ or at a random Sunday on Hannibal Buress’s night at The Knitting Factory in Brooklyn — where there are a ton of white people, but the lens through which they watch is BLAAAAAACK! — she would have killed! And she may have been heralded as one of our (black people’s) favorite types of comedians, one who goes there! But because of the venue and the audience, it felt weird. Well, here’s hoping that Leslie Jones continues to make it weird at 30 Rock…”