This is the fifth I’ve reviewed, so in addition to what’s expected of a typical season finale it’s also worth considering how 2 Broke Girls in particular tends to wrap things up. For the past few episodes what can only be assumed are the profits from Max and Caroline’s Dessert Bar have been climbing, but without any indication as to why that number is important. Now that the season is coming to a close tradition dictates that money come back into focus.It’s been quite a while since I last brought up Dan Harmon’s basic story structure, which he used to guide Community and very likely continues to employ with Rick & Morty. While there are eight distinct points, as well as a helpful graph, it essentially boils down to: a status quo is altered then reverted, but with the character[s] having changed. Say what you will about the show, but 2 Broke Girls truly exemplifies this.

Right off the bat we have Caroline telling Han that she and Max are moving up in the world, and that they’re giving their two weeks notice from the diner. It’s a significant step, especially given that all of the sitcom’s promo material revolves around their ugly waitress uniforms. That being said, and with their closing last week with almost $10K, it looks like a huge shift for the titular duo. At least until disaster strikes, as it is wont to do.

Caroline manages to, with a little help from Bobby, destroy a ludicrously expensive dress at the premiere of her biopic, which we’re finally told is titled The Princess and the Ponzi. Before she can even begin begging Han for their jobs back he extends an olive branch and offers to rehire them first. Consider the status quo stuck to.

The most groundbreaking thing that happens actually has nothing to do with money.

That’s right, not only is Randy back, but he’s down on one knee, and for non-sexual purposes!

I re-read my review to the Season 5 finale in preparation for this one, and it reminded me just how strong the emotional beats in that episode were. Randy and Max part ways, and Kat Dennings pulls out all the stops, presenting us with probably the best performance the show has ever featured [up to that point and until now]. While this proposal doesn’t quite reach those heights, it appears to be a clear callback to that finale, and may be just what it takes to draw audiences back in.

That’s just one of several lines that Dennings drops, such a far cry from the cheap snark or clownish physical comedy she often utilizes, and does elsewhere in this episode. They’re in response to Randy coming on strong, and when he tells her that he “[doesn’t] want to live without [her]” she doesn’t hesitate in asking him to prove it. And down he goes.

As in down on one knee, like in the screenshot, you pervs.

Much like last week, Bobby and Caroline’s relationship suffers a mishap so brief that using either word feels like an overexaggeration. She’s being fussy about his general appearance for the red carpet event, but the problem is he never expresses that it bothers him. In the end she’s the one who approaches him to apologize, and he forgives her immediately, saying that he understands the pressure the situation might lead to, and that it logically “brought up what I hope is the worst in you”. Injecting conflict into their romance is appreciated, but it appears perfunctory at best, dictated by convention and not by the narrative itself.

The finale closes with Max telling Caroline that she got her wish, they’re both wish someone now. Still working at the diner and [supposedly] without a cent to their name, but having succeeded in another, arguably more important part of their lives. Again, I’m not going to go into the likelihood of Season 7 just yet, but as it stands this isn’t a terrible place to end. If the general message is going to be that love matters more than money they could certainly do far worse.

The Title Refers To: The movie that’s based on Max’s and Caroline’s time together. It’s a much more balanced title than The Princess and the Ponzi. 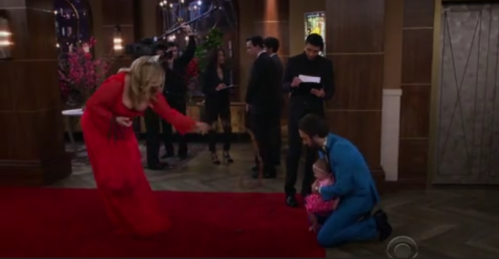 Given that Season 7 is a little up in the air right now, I thought it would be good for me to fall back on a Season 4 stalwart feature for old time’s sake:

Back in the day Max wasn’t periodically doing little goblin jigs, and as a whole there were a lot more attention drawn to either her breasts or Caroline’s legs. “Cheesecake” of course refers to art that plays up women’s sexual attractiveness in women, and in conjunction with “menu” is a fun play on words given that they work in a diner. Anyway. Here’s Caroline’s wardrobe malfunction:

I can’t explain why exactly her dress unravels like that, or how it got attached to Bobby’s suit, or how he doesn’t realize that he’s pulling her across the floor, but there it is. I am sorry, though, that I didn’t figure out how to make these gifs before now.

“Beefcake” is, well, the male equivalent, and there’s been much more of that thanks to Randy’s appearance on the show. The episode closes with him and Bobby getting into a physical altercation, due to the former being the reason that the latter’s family was screwed out of reality TV deal.