2 Broke Girls, S6E5 “And the College Experience”: A TV Review 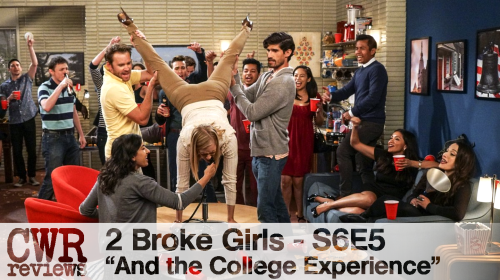 I am invested in Max and Caroline’s relationship.

While it’s no secret that reviewing 2 Broke Girls is far from my favourite task for the week, I do care about how the show deals with the pair at its core. Strongly in its favour is the fact that the conflict that tends to arise between people of vastly different socioeconomic backgrounds is literally the premise of my favourite Arthur episode. For as much as this CBS sitcom is built on the friendship Max and Caroline share, what actually keeps both it and the narrative moving forward is the two butting heads. That said, what difference arises between the two titular leads this week?

Which, to be fair, is sort of true. A much more accurate statement might be: Caroline doesn’t like having fun compared to Max. Though even then the definition of fun would need to be reduced to general debauchery [drinking, drugs, premarital sex, the sorts of activities your parents didn’t want you doing in your teens]. Having just typed out that stipulation it still doesn’t feel entirely accurate, since just last season we had the former heiress knocking back multiple tiny bottles of hotel liquor. Just trying to lay out the conflict in this episode is proving really difficult and I’m not even 300 words into this review.  END_OF_DOCUMENT_TOKEN_TO_BE_REPLACED