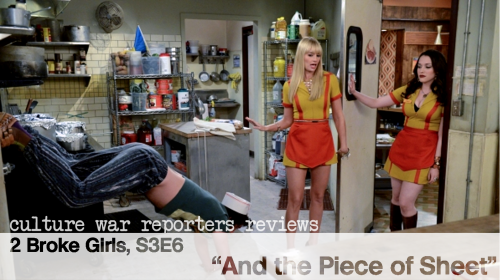 I had written this whole intro about how 2 Broke Girls is so slow to address trends while they’re still hot [see the Kickstarter and cronuts episodes] because I saw the above promo pic with Oleg twerking, but I’ve just finished the episode and didn’t see a single twerk. That’s all mildly disappointing, somehow.

Last week in the Stray Observations I promised that I’d share a “theory” with you about Max, and in thinking on how to write about it I realized that it’s not so much a theory as it is a strange realization about the character. To put it simply, we’re constantly regaled by the show about what a terrible childhood Max had and how promiscuous she is now, but none of that is ever backed up. In this episode she jokes about losing NuvaRing birth control in the lettuce, but when’s the last time she actually had sex on the show? Certainly not so far this season. As far as I can remember not at all last season . . . END_OF_DOCUMENT_TOKEN_TO_BE_REPLACED