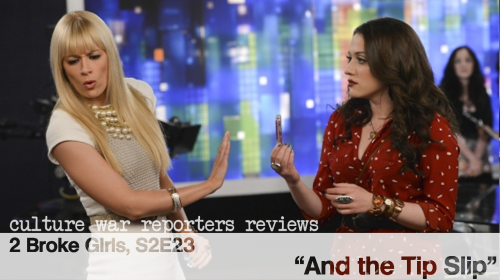 Let me begin by saying that this week’s cold open was a wonderful representation of the show as a well-run ensemble comedy. Max and Caroline are ragging on Has as usual, yes, but he retorts, and Oleg and Earl are not far behind with their own comments. It’s light, snappy, and most importantly funny. Considering that I’m more than likely going to be reviewing this into the next year, this is the show I want to be watching every Monday night.

After the theme song we see that the girls are back at the prison to visit Caroline’s father, who, if I remember correctly, hasn’t appeared since the first episode of this season. Martin Channing, played by Steven Weber, is always a great addition to an episode. His trying to look after his daughter through Max [an unlikely source of love/protection] has always added a lot to the girls’ interactions with one another.

Since Mr. Channing has been put away in white collar prison for swindling thousands it’s to be expected that one day someone would write a shocking exposé on his life. This takes the form of Sandra Rosenthal, an accountant formerly in the Channing’s employ who could not do math. After shooing Caroline away Mr. Channing tells Max that the “shocking” takes the form of her stating that he has a small penis. After Caroline finds out from Max, she decides to join Sandra on Piers Morgan Tonight to expose her book for being what it is: a lie.

Back at the diner everyone already know about the rumor concerning her father’s genitals; Oleg finds out because he has the word “penis” keyed in as a Google Alert. This is all understandably stressing Caroline out, and to ease her tension Han gives her one of the creepiest massages I’ve ever seen. Sophie saves the poor girl by offering to take both her and Max to her fancy spa, though it should be mentioned that Caroline puts up with Han’s creepy baby spider massage for an impressive amount of time.

Now is the time for me to state that the scenes within the spa are really, really good. This show doesn’t often make me so much as smirk, but there was a moment where decent writing and good acting lined up, creating some legitimately funny moments.

First up, the girls are chatting it up a sort of lounge area post-massage. This one woman shushes them, prompting Caroline to tell Max that this is a quiet room. Soon after Sophie enters, loud and boisterous as always. When she is inevitably shushed her reaction is to hurl a lemon at the woman, and that was really well done. Sophie, and Jennifer Coolidge in general, is not a character I particularly enjoy, but this was a really great moment in that it characterizes her in a single action. Sophie is like honey badger in that Sophie doesn’t care; she does what she wants.

Then Sandra enters for her own massage, and Caroline and Max sneak in, the former to pose as her masseuse and the latter . . . to . . . be herself? There is a lot of funny in this scene, so let me try to encapsulate it all.

Caroline masks her voice by making it deeper, and I don’t know how to pin it down, but it is hilarious. She believes, for some reason, that pushing one side of a person’s body constitutes a massage. Max constantly hitting a bunch of wind chimes was a visual gag that began to get tired, but actually got better as it went on. The two girls throwing hot stones back and forth to each other was another great example of physical humor. This is 2 Broke Girls at its best. Goofy and silly without being dirty and crass, two friends getting into antics without rape or masturbation jokes thrown about willy nilly. It was really legitimately great stuff. Anyway, Sandra find out it’s them but Sophie very menacingly talks her out of accusing Caroline of harassment, and then Max and Caroline are back at square one.

Now, what’s actually pretty commendable about this show is that its episodes have always had fairly [and I say “fairly”] witty titles. Last week’s “And the Extra Work” of course concerned the duo taking up short-term jobs as extras on a show, and “And the Temporary Distraction” involved them finding a little extra money via a temp agency. The cold open fakes us out by having Caroline complain about being tipped with Monopoly money, but it’s hard to believe I didn’t see the reason for the title coming from a mile away. The “tip slip” is Martin Channing’s penis.

Caroline is being melancholy and showing Max pictures of her dad doing good, decent stuff, like being at charity events and water-skiing on rich people lakes. Max zooms in on the latter and sees a little something peeking out of the bottoms of his shorts. Mr. Channing has apparently been blessed in the underpants department.

Jump ahead to Piers Morgan Tonight, where the good people at CBS have indeed brought on Piers Morgan. As far as I can tell the man has no connection to the network or Pier 1 Imports, an assertion Max repeats a handful of times. I’m also somewhat disappointed he is not as funny as Taran Killam’s SNL impression of him. However he did have the excellent line, “Ladies, this is not Maury Povich,” which I really appreciated.

So Sandra talks smack about Mr. Channing while Caroline tries to take the high road and bust her for knowing jack squat about math. All the while Max is sneaking around under the table trying to get Caroline to take her phone with the picture of the member in question. As you may have guessed, the phone makes its way to Morgan, and poor Sandra’s entire story falls apart. The host of show tells her that “Your book and you lack any credibility,” and that is the end of that.

Oh, and the Current Total goes down! From $1,205 to $940! I had assumed that Sophie was treating them to their massages, but I guess I was wrong.

As you may have guessed, I enjoyed this episode immensely. As I mentioned 7 episodes ago, I do not grade these reviews, but this is another instance where I wish I did. This episode is as good as “And Just Plane Magic” was bad, and has me legitimately excited for the season finale next week. We may not necessarily have any good forward motion right now, but funny is good. I can take humour over narrative for now.