2 Broke Girls, S2E24 “And the Window of Opportunity”: A TV Review 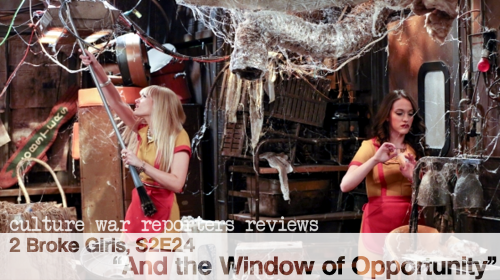 I don’t think I can put into words how excited I was for this episode. Not only does my opinion about starting this all again this fall hinge on how this turns out, it also means a months-long hiatus from doing weekly TV reviews. On many nights, like tonight, I’ve had to double up on 2BG reviews and Shame Days, and it has not been fun.

Forewarning, a ridiculous amount happens in this episode, so much that my order of events probably gets really, really messed up. Please bear with me.

Anyway, we start out with Han wanting to get an A from the health inspector, which is reasonable because he owns a business which serves food, all of which Oleg cooks, from my understanding. Seriously though, he is a fry cook and really the only one in the kitchen, I don’t understand how they feed the customers I constantly see quietly chatting with one another around the diner.

To get back to the action, the cold open ends on a really great note with the aforementioned Ukrainian decked out in starchy white chef’s garb, complete with three hairnets [two of which are visible on his head and beard]. His delivery of “I don’t wanna talk about it” is flawlessly done.

There are a whole bunch of shenanigans, but generally what you need to know is that Han plans to use Caroline [“my show pony”] to get the health inspector on his side but is surprised when she is a woman. He ends up flirting with her and it is really gross and uncomfortable. Han also pays Max an exorbitant amount of money [$85!] to not be around; it is not added to their Current Total.

All of his scheming aside, he still gets a B, though. Caroline quips that “Asians don’t do well with B’s,” and that once at Wharton a Japanese student sitting next to her committed harakiri when she got one. I honestly can’t tell whether or not that’s supposed to be a joke, since Beth Behrs delivers her line like it actually happened. Ultimately not impressed by it, however the case.

I feel like I need to speed this up, so let me quickly introduce the fact that there’s some kind of “window of opportunity” seminar that Caroline thinks is just what her and Caroline need to get their cupcake business back on the right track. It’s $600, though, so they hold a yard sale.

Some guy named Dennis Endicott III shows up, the self-proclaimed Thrift Shop Scout and Brooklyn’s Crazy Kitsch Genius. His wife, Miss Trudy, and bird, Scott, are also there. Most of Caroline’s old belongings, in spite of costing her thousands are worth nothing to the guy. Luckily he comes across a set of Max’s Nugget Buddies, which are apparently some sort of McDonald’s Happy Meal toy I’ve never heard of. He wants to buy them for [you guessed it!] $600.

And see, now I feel like I need to mention the B plot, which I was going to save until the end but which intersects with this one. Basically Caroline tells Oleg that Sophie told her that she needs space [in spite of Max’s repeated warnings not to]. This causes Oleg to strip down to his skivvies in frustration, stating “I’m done changing. I’m back, baby. Spread the word.” This was done in such a way that I actually felt like cheering along with the crowd.

Back in the apartment Sophie enters and begins screaming like a dang banshee [because of Oleg, etc.]; it’s really shrill and irritating and made me want to punch my laptop screen. This is offset by the fact that she is at their place because she doesn’t want to break her own stuff, and starts picking up fragile, shatter-able things and throwing them on the floor. I found this particularly entertaining. It all somehow leads to her proclaiming “Sophie’s back, spread the word” again leading to much cheering. Oh, and she smashed Max’s Happy Meal toys in the process.

Oh, okay, so the B apparently resulted from some back room being dirty, but this back room is obscured by a big ol’ shelf that poor Han can’t get out of the way [“P90X don’t fail me now!”]. It doesn’t really make sense that they got marked down because of it. Max volunteers that they clean it to make the money for the seminar because her toys are smashed.

Fastforward to the actual cleaning, because it is where important stuff happens. The two girls are wearing plastic coveralls and hosing down the walls, and eventually they get to sniping at one another because Max is kind of tired and pissy. She actually makes some comment about water and electricity not being “the best combo” when they start spraying each other, so consider it a bad omen.

This scene was particularly strange, because the jabs they make at one another are not particularly funny. Max blames Caroline for the collapse of their business, which prompts a response about how she was a terrible worker and didn’t aid their cupcake shop in the least. All the while the audience is going crazy. It’s sort of like if a couple began arguing in a food court and everyone around them started laughing and cheering.

Then Max begins to leave in a huff, slips on the wet floor, and grabs a live wire.

Caroline is understandably worried that Max is dead, since she is sprawled out on the floor unconscious. As she is about to attempt mouth-to-mouth boys and men all across North America hold their collective breaths. Honestly, though, it was pretty decidedly unsexy, at least in my opinion. Max wakes up, not dead, and all is well.

Bringing her to get fresh air, Caroline drags Max forward and, by pushing out a pair of shutters, reveals a window onto the street. A guy walking by asks them “Is that like a store or something?” and the play on words in this episode’s title is revealed. “Holler.”

And so Season 2 ends with the two girls starting out of what will obviously be their new storefront next season, conveniently diner-adjacent so that their work is closer to their work. It’ll also be helpful in giving the secondary cast members more screentime. Since they don’t end up using the money Han pays them to clean the back room, we end up going from $940 to our brand new current total of $1,540.

So let me recap, even though it’s almost 1 AM and I have work tomorrow and yet another blog post to write up. I mean, it is the season finale.

Max and Caroline will be moving forward, yet again, with their cupcake business. They will not have crazy overheads like before, and will be right next to the diner as well. On the other side of things, both Oleg and Sophie are “back,” which means something, I suppose. They were the only really significant couple [no offense, Candy Andy and Caroline] and it’s a little surprising that they’ve broken up. It seems pretty permanent, as well [Sophie smashes in his windshield with a hammer].

All in all, the status quo has not shifted much. The girls are back where they started, even after a pretty vicious verbal throwdown. Really the only change that occurred are the two heavily accented Europeans and their highly sexual relationship.

Yes, I will be covering this show when it starts up again in the fall, but until then I’ll hopefully get some other reviews in [maybe even of books!]. It hasn’t always been fun, but I really did thoroughly enjoy last week’s episode, and this one didn’t do too badly for a finale. It’s at the very least showed us what to look forward to in the next season [with just a hint of the usual racist humour], and that’s as much as I thought to expect out of a show like 2 Broke Girls.

To the people who tuned in specifically for these reviews, come back around in a couple of months and these should be back up when the show starts. Feel free to take a look around the site, there’re some pretty decent articles around. Feel free to skip back a week, though, things’ve been a little rough recently.