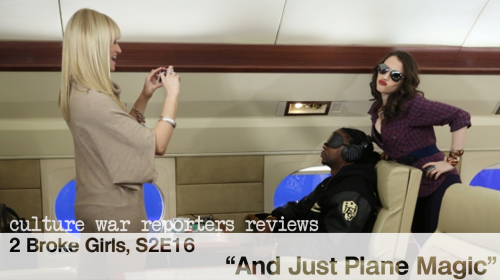 Now I normally don’t grade my reviews, but after watching this episode I wish I had started back with Episode 13. Without ratings there’s no way of indicating how huge the drop of quality is which occurred between last week and this week. What I am saying is that this was not a good 21 minutes of television. With that being said, this review will take place in the form of a bullet pointed list.

And that’s it. That’s what happens. I mean, sure I could mention the fact that the captain of the plane [an old friend of Caroline’s] asks her out on a date which she accepts [at 2 Chainz’s insistence] to ensure their safety in the air. I could also mention that Caroline loves 2 Chainz’s track “Birthday Song” so much that she raps the chorus at least twice in this episode. That ultimately wouldn’t help, though.

I can’t tell, for the life of me, what this episode was supposed to be doing. Caroline mentions that she recently broke up with Andy [see previous reviews] and that Max is easy, so why not spend a night out on the town, and that makes perfect sense. At the end of the episode, however, we’re led to believe that Max’s boyfriend is the British guy [are we really supposed to believe she’s tying herself down?] and that Caroline’s is “Captain Facelift” [he got plastic surgery, ha ha ha]. Are we expected to take that seriously, or not?

Celebrity cameos aren’t a big deal [as it turns out, this week’s HIMYM also featured one by another famous African-American {hello, Black History Month}]; they can be pivotal to the plot of an episode or simply just there for audiences to get a kick out of. In this instance, I feel like CBS asked 2 Chainz if he wanted to be on their show and didn’t know what to do with him when he accepted. Apparently [and “Birthday Song” attests to this] he likes “big booty hos” and sleeping while flying, and that’s about all he really contributes.

Probably the biggest problem I had with this episode [and I echo the sentiments of past 2 Broke Girls reviewer Todd Van Der Werff] is that there was so much potential. Growing up as a poor girl Max never had the opportunity to even sit in a plane, and it’s an understandably foreign experience. Instead of feeling the discomfort of squeezing past your seatmate to visit the bathroom [which has a line outside] or choking down gross airplane food like the rest of us mere mortals she’s instead given hot towels by a French stewardess and eats prosciutto off of a reasonably sized refreshment table. This isn’t something that the show’s audience as a whole can relate with.

What I want now, more than ever, is for Max and Caroline to return to their wacky hijinks of finding ways to make/save money. I miss their adventures of signing up for drug trials and “extreme couponing” and donating their eggs. Most people don’t have great jobs or that much money, and while not [ever] being a great show it was at least relatable on some level. Now we have the two girls travelling on a private jet to the Grammys.

Maybe this is just an indicator that an EVAN YEONG MADNESS WATCH would have been a good thing to institute after all. I’ve been willing to acknowledge this show’s failing from the start, but this week managed to find even my low expectations disappointed. From what I can tell next week Max and Caroline will break a street performer’s hip. I’m not sure what to expect, but I think doing worse would be a challenge; this was like the Aliens: Colonial Marines of 2 Broke Girls  episodes.

Max: “But be careful, Han female-to-male [sex changes] can be tricky.”
Han: “Welllllllll. You would know.”