2 Broke Girls, S6E17 “And the Jessica Shmessica”: A TV Review 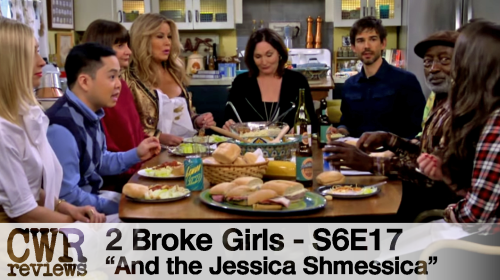 Caroline won’t shut up about her boyfriend Bobby. You know, that cute guy Bobby, her boyfriend? Given their burgeoning relationship, and the fact that he also mentions her in the same way, it makes perfect sense that this would be a Caroline-centric episode. With how few and far between these moments are, however, it doesn’t seem like the writers’ room is as comfortable with the setup as they probably should be.

That being said this is just about as linear a narrative as you can get, and while the premise is tried and true the actual scenario presented is a little harder to swallow.

Meeting your significant other’s family is such a comedic staple that it spawned an actual trilogy [everyone forgets Little Fockers], so Caroline being invited to Bobby’s childhood home, which he moved back into after his father died, is pretty standard fare. His insisting that Max go as well also makes sense, since he considers her Caroline’s family. What’s far less plausible is the entire diner staff being able to just tag along with them.

Look, I get that it’s a sitcom. I also fully buy Max and Caroline warning Bobby to “never discuss a party in the diner” due to their coworkers latching on to their plans. That all checks out. What I’m less on-board with is Bobby not minding having Han, Earl, Sophie, and Oleg over to his house. He’s a nice guy, sure, but he also knows that this evening is a chance for Caroline and his family to make good impressions on each other. Having all of these other people complicates that, and also has the very high likelihood of reflecting poorly on his girlfriend due to them being described as her friends.

I was going to describe what actually takes place as having its highs and lows, but it would be more apt to say that it flatlines and then dips periodically. It’s not awful, as 2 Broke Girls episodes go, just extremely uneventful. It certainly doesn’t help that Bobby’s sister Chrissy, who yells off-camera from the bedroom where she’s sequestered herself, cribs a middling gag from fellow CBS sitcom The Big Bang Theory.

The true conflict of the episode comes from Bobby’s very conservative mother Teresa [Nora Dunn, who also played Schmidt’s mother on New Girl]. She’s still very much hung up on her son’s ex-girlfriend Jessica, who left a lasting impression on the entire family and her face in a framed photo on the staircase wall. She does not warm up to Caroline, who has to live up to what is essentially perfection. That’s a tall order for anyone, but it also doesn’t take long to be filled.

After a few shenanigans involving said framed photo, and the reveal that Caroline and Bobby have been doing the horizontal tango, Teresa concedes that: “You know what, you make my Bobby smile, and he’s even more handsome when he smiles.” While she didn’t make things easy, I also wouldn’t say that the battle was particularly hard-fought, with Caroline wrestling with her own anxieties far more than with her boyfriend’s mother.

At the end of the day what we’re left with is a very lacklustre installment of 2 Broke Girls where the stakes weren’t high and the jokes, when they did land, did so lightly. It’s not a huge mark against the show by any means, the problem is that it doesn’t leave much of a mark at all.

The Title Refers To: Bobby’s ex-girlfriend Jessica, said using a classic example of Shm-reduplication, a construction “generally used to indicate irony, derision, skepticism, or disinterest with respect to comments about the discussed object.”

I very briefly covered this in last week’s “Odds and Ends”, but it was so noticeable this week that I couldn’t help but devote a brand new weekly feature to it. This one is dedicated to a cartoonish style of overacting dubbed-

Happier With Your Mouth Open

For reference, here’s the Whitest Kids U’ Know sketch I derived the title from:

Don Scardino, who directed both this episode and last week’s, appears to have taken a page from the director featured in the sketch. When it comes to Kat Dennings reacting to, well, almost anything, “happier with your mouth open” appears to be the primary instruction given.

Here are the most egregious examples in “And the Jessica Shmessica”:

Reacting to Bobby saying: “My whole family’s gonna be there, Caroline’s whole family should be there too.”

Reacting to a particularly steamy make out sesh between Bobby and Caroline. 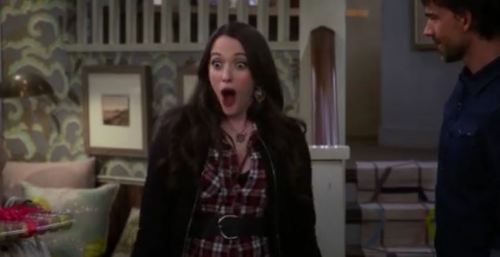 Reacting to a regular middle class American home. “You didn’t tell us you lived in a castle!”

Reacting to Caroline saying: “I don’t even like this sauce.”

Now Dennings is not a bad actor by any means. Extremely typecast as of late, sure, but she has a moderate enough range. The problem here is the people running the show and their belief that over-the-top emoting is what will get laughs out of the audience. Once would be enough for a single episode, but four is pushing it and then some. Dennings is an expressive performer and this is clearly one of her strengths, but Scardino’s directing is putting it to very poor use.

One response to “2 Broke Girls, S6E17 “And the Jessica Shmessica”: A TV Review”