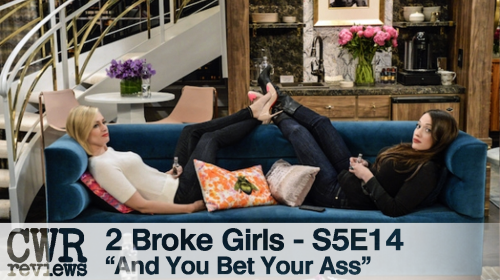 Have you ever watched an episode of 2 Broke Girls and thought to yourself, “That episode ended too soon”? The latest installment of Max and Caroline’s Hollywood adventures continues this week, and somehow manages to feel much shorter than its 21-minute runtime.

A large part of that is because the show largely eschews showing for telling, with two big moments taking place entirely off camera and only referenced after the fact. While this can be effective, the result is ultimately more confusing than anything else. For sitcoms the primary goal is to make your viewers laugh, but the second priority of telling a good story comes swiftly behind that. A lack of emphasis on that aspect is what leads to viewers being confused as to whether or not a love interest has been written out or not. END_OF_DOCUMENT_TOKEN_TO_BE_REPLACED

Look, friendship is hard. I know that as well as anyone. In spite of the interconnectedness that allows you to read these words I’m penning in my North York basement apartment from anywhere in the world, the fact is that many of my peers find it hard to create meaningful relationships [just type “millennial” alongside some iteration of “lonely” into Google and see what comes up]. With that in mind it’s nice to see an episode focus on a problem so many people struggle with.

In particular the issue of starting friendships from scratch, in your twenties, is a daunting one. Compared to the kids you went to college with how strong is your foundation, really? It’s a question Caroline asks herself when Becky White [Diona Reasonover], a girl from Max’s past, arrives at the window to their cupcake store. END_OF_DOCUMENT_TOKEN_TO_BE_REPLACED

Houghton Students and Early Marriage [An Observation, Not a Defence] – Redux and Reflection

Three years ago I graduated from Houghton College, a Christian liberal arts college in the hamlet of Houghton, New York. A few months before I left, however, I wrote my first and only op-ed for the Houghton Star, the student newspaper, the title of which is pretty self-explanatory.

Due to recent events [three engagements within a few days of each other] marriage has very understandably been on my mind, and I thought it would be worth digging up the article and comparing where I was then to where I am now. Due to extensive revamping it’s no longer hosted on the paper’s website, so I’ve included it in its entirety below. There are also pictures from my high school and college graduations, respectively, for your enjoyment.

Houghton Students and Early Marriage
An Observation, Not a Defence

Four years ago I graduated from Grace International School, a Christian school in Chiang Mai, Thailand. With the internet and, of course, Facebook I was never really far away from my former classmates in spite of us scattering to the far corners of the globe. Since that final year of wearing matching polo shirts and eating lunch by the pool seven members of the class of ’08 have gotten married, two of them to each other; three others are currently engaged. Out of a class of 45 or so students that’s almost a quarter of us tying the knot before the age of 23.

A few years later I was musing about the flood of marriages [four happened at least a year after graduation] out loud to my cousin one day, and he asked why all of my classmates were getting married at such a young age. He then quickly answered his own question with a question, asking “Oh, it’s because you can’t have sex until you’re married, right?” This wasn’t a factor for him, and I vaguely recall half-heartedly muttering something to the affirmative. I knew that couldn’t be all there was to it, but it made enough sense at the time.

Now here I am, a senior with less than two months left before I hit the real world. At least four of my college friends have gotten married since my freshman year and “Save the Date” cards continue to materialize in PO boxes left and right. Proposals have lost any kind of surprise they once had for me. Not too long ago two people in one of my classes were engaged over the weekend and I [not that I wasn’t happy for them] didn’t give it a second thought. My first semester here I had never heard of “ring by spring” or the more clever “getting my MRS.” I didn’t understand at the time how quickly dating relationships could metamorphose into marriage or how prevalent engagements would be in my college life. END_OF_DOCUMENT_TOKEN_TO_BE_REPLACED

So ends the three-issue story arc “Crushed” and any semblance of a relationship that Kamala Khan and family friend [not cousin/blood relative] Kamran once had, not with a bang but with a helping hand. Let me backtrack a little-

Really, this plot in this issue is fairly simple. As I mentioned pretty explicitly in my last review the newest character to be introduced is bad news, his closeness with our heroine seemingly acting as a way for him to more easily serve his master, Lineage. That’s where things get a little less simple, so I suppose I should backtrack yet again and try to explain what’s been happening outside of Jersey City for those of you who are only reading this book out of Marvel’s many, many titles.

To start with, on the recap page you may have noticed the final line: “These events take place between Inhuman #14 and the Inhuman Annual.” END_OF_DOCUMENT_TOKEN_TO_BE_REPLACED

What better time to take a look back at the fourth issue of Ms. Marvel
than today, on the eve of its sixth? As I mentioned in my last review, I missed out on this due to being abroad in a place where English comic books are scarce. Enough about that, though, let’s see what Kamala was up to.

This issue fits as a natural segue between our heroine learning that vigilantism comes with its consequences [getting shot accidentally at the end of #3] and that it takes even more failure, followed by bravery, to truly succeed [#5, natch]. It’s also a lead-in to the kind of traditional superhero antics you expect in books with “Marvel” or “DC” on them.

More importantly, though, this is the issue that really spotlights Bruno and Kamala’s friendship. It’s not just that he reminds her [and reveals to us] that he’s her “second-best friend”, it’s the sudden inversion of their relationship that takes place.  END_OF_DOCUMENT_TOKEN_TO_BE_REPLACED

This post was supposed to be about TBS’s new gameshow King of the Nerds, which premiered last night, but I didn’t catch it on TV and couldn’t find a way to catch it online, so that was that. Instead, since Gordon and I so eloquently discussed the purpose of post-secondary education this Wednesday, I’m going to be writing once again about college.

It’s said, and a study by Professor of Communication Glenn Sparks backs me up on this, that the friends you make in college become your best friends, the ones that last a lifetime. Which is great. I mean, it all makes sense. You’re living in the same space with other people who are, at least for a short period of time, studying the same sorts of things.

What a wonderfully diverse group of friends.