Even though I wrote a little over a thousand words last week on my experiences with Doctor Strange [required reading for this blog post] there were a couple of additional criticisms I wanted to level against both that specific film and the industry as a whole. While I covered pretty thoroughly how Asians were poorly represented in Marvel Studio’s latest offering, what I didn’t really touch on was why.

When Diversity Means Painting With All the Colour of the Wind

In the months leading up to the release of Doctor Strange the conversation about the Ancient One’s casting began heating up. With mainstream news outlets picking up on the controversy there were many waiting to hear from the creators themselves, which brings us to the episode of the Double Toasted podcast that guest starred screenwriter C. Robert Cargill.

While his explanations regarding the character have since been championed by those defending the casting decision, even after his rescinding all comments made, and in spite of them being refuted by others, in particular by Shaun of the No, Totally! podcast, what I want to focus on are what he says right after that:

Now if you don’t want to actually listen to him, which I find perfectly understandable, I’ve also transcribed the relevant quote [emphasis added]:

“But when you start to see this film you’ll see that what we were able to do with Kamar-Taj, we made one of the most multicultural films most people have seen in years. Like this film is [. . .] I’m not certain that there’s a single major race that isn’t represented with a speaking role in this film. It allowed us to bring in, even as small characters to build upon later, a lot of characters from the Doctor Strange universe who come from all over the world. We were able to play with a lot of things and it gave us a lot to work with.”

Cargill takes a lot of pride in Doctor Strange featuring a very racially diverse cast, at least in regards to background characters and bit parts. The question is why that’s necessary given that Kamar-Taj, where much of the film is set, is located in Nepal.

To turn the clock back two years, it’s why I was so frustrated by Big Hero 6 and its setting of San Fransokyo. Despite being set in a metropolis intended to be a mashup of polyethnic San Francisco and largely monoethnic Tokyo the main cast ended up looking like this:

Featuring, and the post goes into further detail, a single half-Japanese character.

There has been a large push towards diversity in Hollywood, which sounds like a net positive. The issue is that it has trended towards equally representing, and I’ll use Cargill’s terminology again, every “single major race”. The original Big Hero 6 comic book featured a fully Japanese cast , yet what was presented on-screen was a group where Japanese people were actually in the minority.

To use yet another food metaphor, imagine a movie theatre that only sold popcorn with a little butter and salt. Eventually the demand for more variety arises and the management concedes that it’s in their best interests to offer a little more. One day moviegoers walk up to concessions to see- 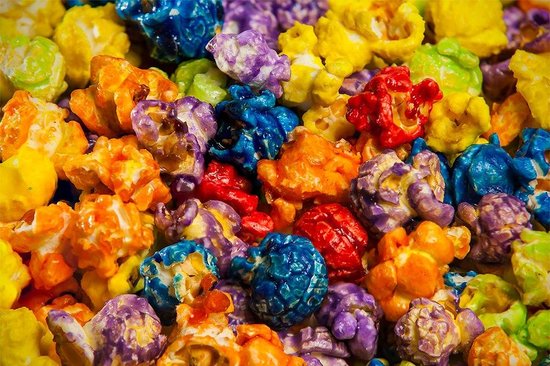 -behind the glass. Not caramel popcorn, or cheddar cheese, but this hodgepodge of colours and flavours. Which isn’t to say that people don’t enjoy it, they do. At a certain point any change is a good change, and the rainbow popcorn itself is actually delicious. Yet eventually they do start to wonder why these are the only two options for their favourite movie snack, why they can’t get a bag of just sweet and salty kettle corn, that sometimes all they’re looking for is one specific, unadulterated flavour.

I can’t count the number of times I’ve seen a news article on how an upcoming film adaptation’s director or producer recently announced their decision for a “diverse cast”. Oftentimes that’s in regard to a movie that might otherwise have starred a cast that is mostly, if not completely, non-white. The rational appears to be that a film starring a single minority group will be seen as being solely for that audience. On that note, there is a very recent example that proves just how wrong that line of thinking is-

Yet another production falling under the Marvel umbrella, Luke Cage was a show that refutes that idea completely. But where did the Netflix original series go right where so many others go so very, very wrong?

Luke Cage: By Black People, For Everyone

You don’t have to look long or hard to find an article praising this show for its
authenticity in accurately portraying life for many African Americans. That can be attributed in part to producer, writer, and showrunner Cheo Hodari Coker, a Black man himself, as well as the other writers. He describes the group as:

“Our writers’ room was majority African ­American—which is a rarity on ­television—but it was also ­diverse in every way. When it came to ideas, ­everybody had their own power. There was beautiful conflict when it came to story.”

It’s particularly important to note that in spite of being largely made up of Black men and women he stressed the diversity of creativity and ideas that were present. Having a single person who can relate and empathize with the characters can be incredibly impactful, but having several adds nuance and ensures that more than a single perspective will be heard and, in turn, depicted on-screen. While this authenticity isn’t the sole factor in having any piece of art resonate with a broad audience it’s significant nonetheless.

Doctor Strange is by no means an explicitly Asian story, yet it is still largely set in Asia and, given a direct adaptation, would have starred an Asian person in a significant role. In addition to that, much of the concern surrounding the Ancient One’s portrayal was of falling into racial stereotypes and offending a large chunk of the movie-going audience. With that in mind, how many Asians were involved in its creation?

As mentioned earlier Doctor Strange was written by C. Robert Cargill, who was joined by Jon Spaihts and director Scott Derrickson, all white men. Producing the film was Kevin Feige, who has been doing the same for all Marvel Studios productions, and who is also a white man. When considering the pitfalls of racial stereotyping how much did this group really understand? Was there ever an Asian person in the room to be asked if any intended portrayal might be seen as offensive?

The next Marvel Netflix show, to be released next March, is Iron Fist. I last covered it very early this year, specifically in regards to the idea that they might cast an Asian as the titular character. Similar to Doctor Strange this is yet another narrative steeped in orientalism and the white saviour trope, arguably more so as Daniel Rand becomes the next of a long line of mystical warriors.

While it has since been announced that Rand would be played by Finn Jones, less has been released about the people behind the camera. What we do know is that Scott Buck will be the showrunner, with Tamara Becher serving as one of the writers. Without a single Asian person to be seen working on this production is it really any wonder that at the time of this writing Iron Fist appears to only have three Asian actors as a part of its cast? Again, these are not explicitly Asian stories, but with that region and culture playing such a large part would Asian voices not be a much-needed creative contribution?

If diversity and representation are in fact important to Marvel Studios and Marvel Telvision, as well as the entertainment industry as a whole then changes have to be made both in terms of how decisions are being made, as well as who is making them.