Storing Characters: If Not The Fridge, Then Where?

Not all appliances are created equal, and that certainly rings true for longtime readers of comic books. While some of us have discovered the phrase simply by taking part in the discourse that surrounds superhero titles, there are those among us who can remember reading Green Lantern #54, which featured the titular character discovering that his girlfriend had been murdered and stuffed in the aforementioned kitchen mainstay.

Since then [and thanks to Gail Simone]

“fridge” has become both a noun and a verb, and occurs to a character when, according to TV Tropes, “[they are] targeted by an antagonist who has them killed off, abused, raped, incapacitated, de-powered, or brainwashed for the sole purpose of affecting another character, motivating them to take action.” It shouldn’t surprise you at all to learn that most characters who have been fridged are, you guessed it, women, and for the benefit of men to boot.

This particular topic made its way back onto my radar after an internet-response-to-comic-book-happenings debacle that I don’t want to get into [Brett White goes into what took place as well as the resulting backlash quite well, if you’re interested], where one of the listed grievances against a particular writer was that he had fridged a longstanding female supporting character.

Timothy O’Neil, whose blog has somehow missed making its way unto the links sidebar, tweeted the following with that in mind:

END_OF_DOCUMENT_TOKEN_TO_BE_REPLACED 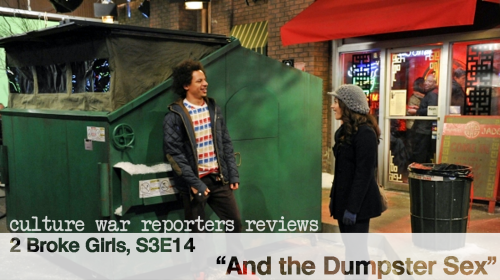 This episode of 2 Broke Girls . . . I think probably the best way to sum up my feelings about this episode, humour-wise.

“So you thought that in your head and your brain was like: ‘That’s okay to say?'”

“That’d be funny if you got jokes.”

I’ve said it before, and I’ll say it again, I’m not this show’s target audience when it comes to comedy. It’s not like I’ve forgotten that, either, it’s just that in the 21 minutes and 45 seconds of this episode I heard five iterations of the joke “brown chicken, brown cow” and that’s four and a half times too many.

And now I’m going to drop that thread completely, because no one tunes into these reviews to hear me whinge about how it wasn’t funny. I mean, this still manages to be a far cry from that one episode with 2 Chainz, so I count my blessings no matter how small they may be.  END_OF_DOCUMENT_TOKEN_TO_BE_REPLACED

END_OF_DOCUMENT_TOKEN_TO_BE_REPLACED

Tropes, Archetypes, and Why Original Creative Writing Is Like A Game of Rock, Paper, Scissors

Culture War Reporters, since its inception, has never been a place for fiction of any kind. As a result, when both Gordon and I hang out we often find our discussions centre around stretching our creative muscles, asking questions like: “If you had to come up with a team of mercenaries, with a minimum of five members, what would it look like?”

The issue with all questions like this is that we run into a little something King Solomon said, way back in the day [emphasis added]:

What has been will be again,
what has been done will be done again;
there is nothing new under the sun.

How do you come up with something original, something that truly hasn’t been done before? END_OF_DOCUMENT_TOKEN_TO_BE_REPLACED