This isn’t going to be the longest post for two reasons: 1) I made a bet with a friend and am only eating leaves for the entirety of today [this was my breakfast] and am therefore weak in mind, body, and spirit, and 2) this is a very straightforward assessment that two other other writers have already broken ground on already. Let me take a single step back, though, and remind you of what happens in a week’s time and why I’m writing this.

I know I used my love of comic books to springboard my post on Flash Boys, the novel Aaron Sorkin refuses to write a screenplay for because “there aren’t any Asian movie stars”, but here we are again. Well, sort of. See, comic books only reach so large an audience. Comic book movies, on the other hand? They find themselves as two out of the top five highest grossing movies of last year [four of the top ten]. Everyone wants to get in on that business, to the point where a shared universe of larger-than-life characters was one of the goals of the truly awful Dracula Untold. Here’s the thing Universal, you already own The Fast and Furious [referred to as FF from this point on] franchise which has been going hard since the early aughts.

Remember at the end of Iron Man when Tony Stark meets Nick Fury for the first time and your nerdy friend gripped your arm so hard you thought they would snap it and whispered directly into your ear that “it’s happening“? The FF movies have been pulling that same move for years without the help of a narrative that’s been ongoing since the 60s. Every one of their reveals is builds on the preceding films,and the fact that they’ve managed to make this viewer drop his jaw is worth mentioning in and of itself.

END_OF_DOCUMENT_TOKEN_TO_BE_REPLACED

Is this 2 Broke Girls‘ most daring episode? I say that, of course, because this episode features Max and Caroline spending a very short amount in jail, a place that is interchangeably referred to by a handful of characters as “prison”. What I’m referring to is the very reason, as it so happens, that I missed reviewing this last night as I usually do:

It’s Orange is the New Black.

Arguably Netflix’s most well-known original series [sorry, House of Cards], Orange is the New Black has been a cultural phenomenon that has only been hindered, however briefly, by the extreme pause between seasons caused by their released in their entirety all at once. Incarcerated women now bring to mind Flaca [sorry, Piper, we all have our favourites] and the other inmates at Litchfield Penitentiary and the hardships and comforts their stays have awarded them. There’s a lot of pop culture baggage surrounding the topic, and yesterday night . . . well . . .

2 Broke Girls, S3E18 “And the Near Death Experience”: A TV Review 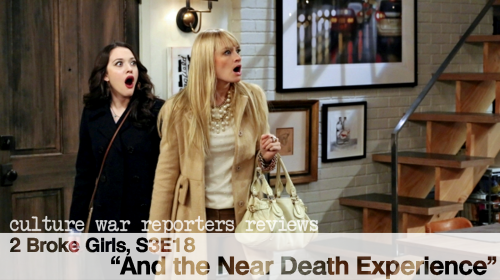 This week opens up with the strangely comforting scene of a table of eccentric [see: easily mockable] diners and the two girls’ reactions to them. Instead of hipsters or, I don’t know, bronies, we have half a dozen cumberbitches fresh from Sherlock Con. I had planned to live the rest of my life without ever typing out that term, but that’s behind us so let’s move on-

What you all have to understand is that I take everything I watch on TV very, very seriously. This means being extremely perplexed upon hearing Max insinuate that she never went to high school, particularly because it makes the story of how she lost her virginity [see the Stray Observations here and here] that much more disturbing. The thing is, I don’t think you have to be a stickler for continuity to see the gargantuan staring-you-in-the-face error in this episode. END_OF_DOCUMENT_TOKEN_TO_BE_REPLACED

“It would be illogical for me in the third movie to be like, “You know what? I’m kind of attracted to guys.” That’s just not going to work. It’s clear. It was just more a philosophical question.” END_OF_DOCUMENT_TOKEN_TO_BE_REPLACED