2 Broke Girls, S5E19 “And the Attack of the Killer Apartment”: A TV Review

What do we want out of Randy? This week marks the sixth episode he’s been around, and within that time he’s already broken up with Max and travelled across the country for her. Neither are insignificant events by any means, and even starring in that many episodes is a feat in and of itself [Austin Falk’s faux-Irish Nashit was only in four last season]. That being said the question still remains-

The 2 Broke Girls showrunners don’t appear to have any interest in either Max or Caroline entering into a long-term relationship, so let’s assume that Randy will eventually exit the show. Besides simply being entertaining, which is and should be the baseline expectation with sitcoms, there has to be more to the men who step in and out of the girls’ lives.

Initially Ed Quinn’s character followed the same arc that Max’s past boyfriends have: as she grows closer to them the increased intimacy makes her uncomfortable, causing her to want to pull away. This week appears to have left that far behind with a casual exchange of “I love you”, and in spite of being a realistically healthy thing stable relationships do not equate to good television. While their “first fight” doesn’t amount to much, it’s the basis for it that could make Randy one of the most interesting addition to the 2 Broke Girls cast. END_OF_DOCUMENT_TOKEN_TO_BE_REPLACED 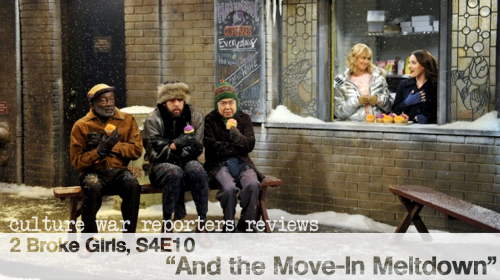 Speaking of “meltdowns” I totally had the best melt for dinner [not a grilled cheese, as some may incorrectly call them]. It had cheese, obviously, as well as homemade guacamole and spinach. The second also had kimchi [I should mention I actually ate two of them]. Now that my prose-version of Instagram is over, I suppose we should move along to the episode itself-

Now last week’s review was pretty short and sweet, but I mentioned, as I have many times before, that this is a show that focuses a little too closely on its titular characters. Max and Caroline are the headlining act for sure, but every other member of the cast appears to be relegated to bit players at best. This episode appears to be the writers’ room forcing me to eat my words. END_OF_DOCUMENT_TOKEN_TO_BE_REPLACED 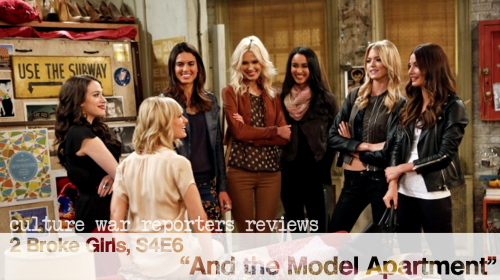 I remember how in the pilot episode Max explained that she didn’t pay rent because the previous tenant died yet continues to pay for it with his pension cheques or something along those lines but are you kidding me? My suspension of belief already took a beating when they decided to keep the horse, but now to find out that they have an entire barn? Is that why they’re so poor? Otherwise, honestly, it makes no sense since they both work two jobs and none of what they make goes towards rent. END_OF_DOCUMENT_TOKEN_TO_BE_REPLACED

A couple days ago, I came across Primer, an online magazine declaring itself “A guy’s post-college guide to growing up.” At first glance, it appears to share a lot of similarities with another publication I reviewed, The Art of Manliness, and while I’d like (and intend) to do a full-on compare/contrast piece, I’ve still got some research to do. As of yet, though, the primary distinction between Primer and Art of  Manliness is that the former appears to be a lot more validating of the millennial generation, who are more commonly accused of laziness, selfishness, and naivety.

And let the debate rage on…

END_OF_DOCUMENT_TOKEN_TO_BE_REPLACED 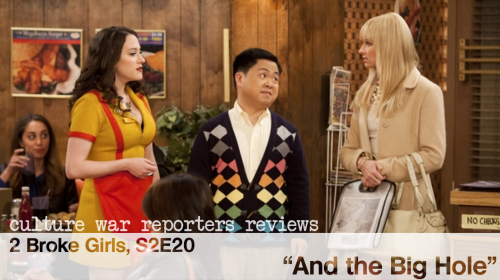 The “big hole” in this episode is courtesy of Oleg, whose leg punches through the girls’ ceiling due to him and Sophie’s vigorous lovemaking. That’s probably too delicate a word to describe what was going on, I mean, they were using a bowling ball. Anyway, that’s the cold open for ya.

Since Sophie and Oleg’s excessively cacophonous copulation leads to Caroline losing sleep [she didn’t strap sponges to both ears and get smashed on booze like Max did] she is 20 minutes late to her shift at the diner, which starts the first real conflict I can remember between the girls and their boss, Han Lee.

Now, I am not a person who enjoys the jabs every single character on the show makes at Han. They constantly attack a) his height, or b) his sexuality, and both types of joke been done to death. I don’t know who thinks they’re funny, but the show’s writers seem to think we live and breathe the stuff. What I do love, and you know this if you’ve been reading these reviews, is when Han dishes it back as good as he gets it. It’s great to see him as more than just the show’s whipping boy, and Matthew Moy almost always nails the delivery.

So when Caroline finally shows up, makes excuses about having to take a nap before badmouthing the diner she works at, Han gets a little upset. He makes a remark at their shop closing, which is sort of in poor taste, but Caroline calls his establishment a “dumb diner,” and he pulls out the big guns. By firing her.

“Well at least my diner is still open and successful, whereas your cupcake shop was so dumb it failed.”

“Oh really, you quit? You must be dumber than my diner because I already fired you.”

Which leaves Caroline unemployed, a change I would have enjoyed more if Max hadn’t gotten her fired in the last episode. She waits in front of the apartment door [like a puppy] for Max to get home so she can start complaining about how unemployed she is. Then the girls head upstairs to return Sophie and Oleg’s sex bowling ball because we’ve gotta keep this episode moving.

Sophie answers the door roleplaying as Beyoncé, which was an image I did not need to see or want to write about. Upon hearing that Oleg was inside dressed as Jay-Z I fully admit that I expected him to be in blackface; this is not a show that has had a very good track record when it comes to race. Thankfully, he was not. The girls suggest that the two get their freak on at Oleg’s, and he worries, for some reason, that she’ll be disgusted by his place, an understandable sentiment if they weren’t already sleeping together. So Caroline offers to give his apartment a woman’s touch, for cash .

I spent actual time making this gif specifically for this blog, and you will appreciate it.

Subjectively, Oleg’s apartment is awesome. Sure, it has skeevy stuff like a sex swing and a sex chair and an anatomically correct “previously loved” sex doll, but it also has a sweet waterbed and some really awesome lighting courtesy of 1,500 tracer bulbs, most of which he tore out of the new Cineplex 14 on Queens. It’s got some good stuff going for it, is what I’m saying, and any logical person would assume that Sophie would be down with the whole deal. But Oleg thought it needed a bit of a change so of course Caroline wrecks it by covering it in beige.

Max realizes that she needs to get her friend her job back [the irony] and tells Han they should go get high and watch movies. In the most obvious plot twist since “they were planning a surprise party the entire time,” she gets both Han and Caroline into Oleg’s newly female-ready apartment to kiss and make up. Minutes later and they are hiding in a closet [cue joke about Han’s sexuality!] from Sophie and Oleg. Their hijinks crouched in a small space with a sex doll aside, we’re also able to witness another turn of events you all knew was coming, that Sophie was actually into the weird kinky sex stuff and “[likes Oleg] a little bit” for who he is!

Then Han admits that he overreacted and hires Caroline again.

Also the Current Total ends at $205, because apparently Oleg paid Caroline the money to make his apartment look like it was inhabited by a 70-year-old woman.

I guess I should probably talk a little bit about the episode as a whole. Yes, everything turned out exactly the way you thought it would, but what I’m more concerned about is what happened between the characters. Han is the butt of every joke in every episode, and it is fantastic to see him sticking up for himself for once. That being said, it is disappointing to have things resolved on the basis that Caroline “makes everything prettier,” and that he misses her. Caroline apologizes too, of course, but I doubt this will put an end to their sassing the man who signs their paycheques . As I mentioned earlier, it is really stupid for Max to be trying to get Caroline re-hired when she cost her a pretty decent office gig just last week; it’s illogical and thinking about it still makes me angry.

Two episodes away from the car crashing in through their cupcake store wall and we’re still left without any real direction, though Caroline insists that cupcakes are still the dream. We’ll continue to stick around and see  what happens, I guess.