Why Horror Movies Are Good For You

That’s not something you’d expect someone to say about the genre, is it?

Sure, you might hear about horror “classics”. There are plenty of fans out there who’ll talk about their personal favorites. You might even hear critics fondly contemplate how certain horror flicks were telling of their times. But morally edifying?

Well that’s the argument I’m going to be presenting to you today.

Now this isn’t the first time I’ve tried to champion the macabre. I don’t expect it to be the last either- not considering the reaction folks give me when I say I enjoy the stuff.

And before we really dig in here- let me get the obvious out of the way.

Yes, a lot of horror movies are garbage. The slasher/”teen-scream” subgenres use cheap gore and excessive nudity as a crutch for plot. More serious attempts still rely on the same cliches that have been around for decades. Plenty are poorly acted and have production values that could be outstripped by a middle school enactment of Romeo & Juliet.

Readers, this rambling only semi-coherent post comes from the sickbed of yours truly, where I am currently battling a cold that I just don’t have time for right now.

With that in mind, you might be e’er so slightly charitable when you hear me ask: “No seriously, what’s up with subscription services?”

For those of you who were as unaware as I was (up until a few months ago), the latest trend has folks being sent, well, “boxes of stuff”.

How it works is essentially as follows: one will pay a monthly fee to a company who will, in turn, send said person a box/crate full of items they believe the individual will like. While there is some customization available (I could get a monthly shave-kit delivered, for example), there’s often a certain degree of chance involved. BlueApron.com, for example, will send subscribers recipes with per-packaged ingredients. Other sites, like LootCrate.com will send whatever nerd and geek accoutrements they decide to. 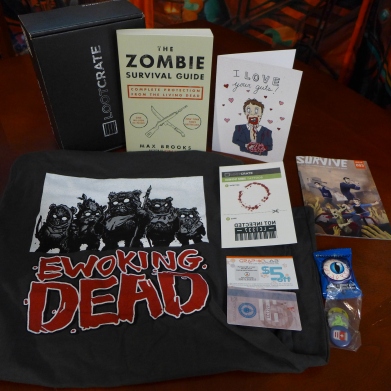 Now readers, maybe its the ongoing battle in my sinus cavity or maybe I really am just a mean, cynical miser, but I just don’t get it. And I don’t mean to come across harsher than I probably will, but I really don’t quite like what this seems to say about us as a culture. Do we really have so much excess cash that we’re just giving it to some strangers and saying “surprise me”? END_OF_DOCUMENT_TOKEN_TO_BE_REPLACED

END_OF_DOCUMENT_TOKEN_TO_BE_REPLACED

Let’s try to figure out why. END_OF_DOCUMENT_TOKEN_TO_BE_REPLACED

Retract, Don’t Do It, When You Want To Go Do It

To the few people who read Gordon’s Fame Day post for today, and for those who may be looking for it,

After speaking with him the two of us decided that the post he wrote was not up to the standards we try to hold the site to as a whole. To absolutely give credit where it’s due he’s had an ungodly amount to do at work, which cut into the time he had to write for the blog.

My post will still be going up tomorrow, and you can expect us to more or less get back to our normal schedule.

That’s all for now,

PS: Here’s a gif of my favourite current Survivor contestant to end things. Woo’s got them ninja skills. 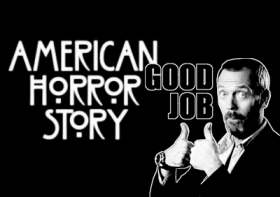 Today, I’d like to tip my hat to one of my favorite shows, a young series by the name of American Horror Story.

Now it’s no secret that the horror genre is universally despised, being seen by many as being lower on the totem pole than even toilet-humor comedies or the most saccharine romances out there. I could probably spend an entire post speculating on why exactly horror flicks are treated with such little respect (a lot of it is probably due to the genre’s inbred cousin, the “teen scream” flick), but that’s another topic for another time. I’m here to simply showcase the series and highlight a few of its key strengths and accomplishments that I think make it worthy of a Fame Day.

Each season of the show (the second has just concluded, and a third has been greenlit) is a separate story, made up of the horrific lives of the characters as they struggle with their pasts, their inner demons, and some ever-present terror always lurking just beyond the shadows. It essentially cashes in on the initial charm that LOST had before it jumped the polar bear.

Guilt and shame are themes that play heavily into the series as a whole (or at least, the past two “stories”), giving even the most heinous characters a degree of sympathy. Again, similar to LOST at its best, the constant shifting of the story from one perspective to the next prevents the series from ever being boring. Granted, the madcap pacing doesn’t always work (especially in the first story), but for the most part, the audience is always kept interested.

And that brings us to the first key accomplishment of the series:

As I stated above, horror is simply not popular- at least, not in any mainstream way. Tim Burton’s lighter works are really the closest most people get to anything remotely macabre, and the fact that the series has continually drawn in high ratings (to say nothing of critical acclaim) is nothing short of amazing. And we’re not talking about a series that is eerie or has a handful of jump-scares, we’re talking about truly unsettling elements here. I’m certainly not alone in hoping that that AHS‘s continued success serves to begin building bridges between mainstream entertainment and horror subculture; heaven knows both could benefit from some fresh perspective.

And even in the subculture, AHS is playing a pretty major role. It’s…

As a result of the genre’s (comparative) isolation, quality in horror is typically pretty rare. When you can’t secure funding for special effects, good equipment, or even B-level actors, chances are your product isn’t going to be all that good. Of course, when you have a built in audience who would pay money to watch Dwayne Johnson protect an orphanage from chupacabras, why would you even bother trying?

I would actually probably watch that…

I’ve seen my fair share of (decent) horror movies, and I can count on one hand the films that had even passable cinematography. AHS, as a series that actually has some decent funding and actually puts effort into creating tense atmospheres and believable effects, is raising the bar for the entire industry. When AHS is the basis for most people’s experience with the genre, there’s going to be pressure on the rest of the industry to meet and excel the expectations the mainstream audience is going to have. Furthermore, AHS‘s star-studded cast (including Zachary Quinto, Ian McShane, James Cromwell, and, I kid you not, Adam Levine) is hopefully going to make the horror genre more inviting to high-caliber actors who can actually sell the audience on the direness of the situation and maintain interest without having to drag in a bunch of fornicating teenagers.

And perhaps most importantly, it comes down to this:

While the stories are good, as are the actors (Jessica Lange being easily more frightening than the goriest bits of the series), it’s some of the basic discussions held during the stories that really hit home. Oppression of women and the dark history of psychology are topics repeatedly brought up, and dealt with both in a historically accurate and totally visceral manner. Perhaps the most disturbing thing I’ve yet seen in the series hasn’t been any of the monsters or murders- it’s been a demonstration (scaled back for TV, even) of the psychological “treatment” given to people “suffering from homosexuality,” seen at the time as a mental disease. Those five minutes alone were more frightening than anything else in the story- and it was amazing. Amazing to see some serious and deep social commentary made, and to see the brutality and insanity some people had to undergo actually presented in a way that’s going to resonate with the audience. You will be a better human being for having watched that scene.

Though in the spirit of honesty, your view of nuns will probably diminish a bit…

When’s the last time you could say that about a rom-com?

A final note. I would’ve included more gifs, but (1) I didn’t want to spoil anything and (2) easily 90% of all AHS images are of Evan Peters, who is apparently just the bee’s knee’, if the series’ female fans are to be believed.