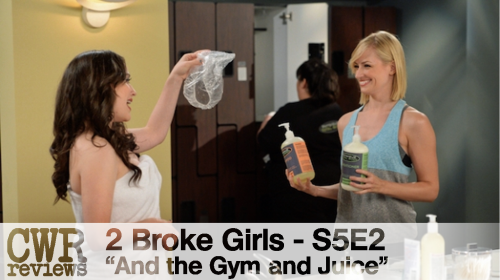 A lot of the time, when I wish I had implemented a grading system into these reviews when I first started two years ago, it’s because I want to underscore how truly bad an episode was. Not this week. This week I wish that I was able to qualify how good 2 Broke Girls usually is so that I could give “And the Gym and Juice” an A.

And no, this isn’t a particularly groundbreaking twenty-something minutes of situation comedy, but it is exactly what it needs to be, which is to say that it’s funny. Just two episodes into their fifth season and 2 Broke Girls appears confident in allowing its titular characters to truly carry the show, and they do so in a truly admirable fashion. I’m not sure if there was a shake-up in the writers room, but whatever happened it has me generally looking forward to future installments of the show. END_OF_DOCUMENT_TOKEN_TO_BE_REPLACED 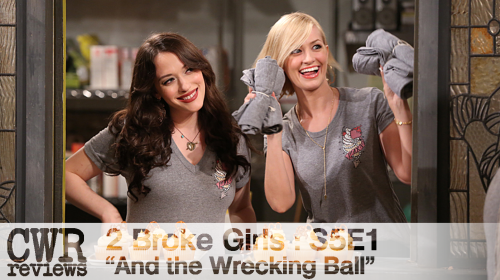 Back like a bad rash, and this time on Thursday nights! That’s right, CBS has finally started airing the fifth season of 2 Broke Girls and not even the AV Club, who stopped reviewing the show midway through the second season, could ignore its momentous return to the television landscape.

When we last left our heroines at the culmination of Season 4 they were headed off to France for a much-needed vacation. More importantly, however, they realized they had been neglecting their dream of running their own cupcake business [mostly through apparel-related moneymaking schemes]. While they waited for their plane to begin taxiing down the runway Max turned to Caroline and confided:

“Well, partner, after all we’ve been through this year, whatever comes next I kinda feel ready for it.”

In this episode, scripted and directed by showrunner Michael Patrick King, we find that “whatever comes next” includes a rude tour guide who shares a name with yogourt [Dannon] and the threat of their little corner of Williamsburg being levelled to make way for an IMAX theatre. At least one of these two is a substantial hurdle to the success of their business, as the absence of a storefront would make selling cupcakes pretty difficult. Also the loss of the diner, ostensibly their primary source of income. END_OF_DOCUMENT_TOKEN_TO_BE_REPLACED

END_OF_DOCUMENT_TOKEN_TO_BE_REPLACED

I Shouldn’t Have To Say This, But Community Should Be Good [Or At Least Better]

It’s one of those weeks where Friday rolls around and I find that I’m writing my fifth post of the week. Granted, two of them were reviews and one of them I co-wrote, but it’s still a lot. One of my favourite things to do to shake up the ol’ grey matter is watch a little TV, so of course I ended up finding myself unable to blog about anything else but the finale to Season 5 of Community.

Strangely enough, this is the show that’s appeared most on this site [save for 2 Broke Girls, but y’know]. While I began with discussing Season 3’s wonky airing schedule, I very soon turned to providing constructive criticism. Then came two posts where Gordon and I discussed Seasons 4 and 5, respectively, in which I took to defending the show and the directions it was taking [in contrast with his outright vilifying it]. Having just come off of that last episode I’m not sure I can maintain that stance anymore. END_OF_DOCUMENT_TOKEN_TO_BE_REPLACED

END_OF_DOCUMENT_TOKEN_TO_BE_REPLACED

EVAN: So, dear audience, here we are again. Back in September of last year we wrote an E&GT about the fourth season of Community, albeit an entire month early. Since the trailer for Season 5 hit the internet yesterday, we figured we’d try our hand at this again.

GORDON: Let the record show that I have long been of the opinion that after Community‘s inexplicable tanking shortly after its first season, I became an ardent advocate for the cancellation of the show. While the trailer is intriguing…

…I remain skeptical. Been starburned too many times before. END_OF_DOCUMENT_TOKEN_TO_BE_REPLACED